I have to admit the impending downfall of Chris Huhne filled me with a sort of righteous shout that he had it coming to him. To go from high flying politico and wealthy economist to potential jailbird, wealthy economist and ex-politico was just desserts for that lowest of classes, the professional politician. 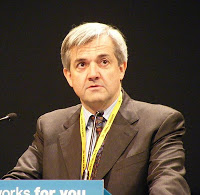 But my wife who has much more sense than me and is much more in touch with reality has caused me to reconsider my thoughts.

Huhne has lost so much and has more to lose over what was really an act of stupidity. He and his wife lied about who was driving when he got snapped for speeding. At already 9 points on the licence he was in danger of losing his ability to drive, and probably some kudos within the political circles that he moves. His lie has gathered a life of it’s own with his wife’s revelations and is now totally out of control.

Huhne has lost his wife.

Huhne has lost the respect of his children.

Huhne has lost his political career.

And all because of a lie. Others do much worse things and lose less and are punished less. I hope that our system of justice shows him mercy. Mercy is important. Lord help us to remember that.

A Woman Caught in Adultery

8 Jesus returned to the Mount of Olives, 2 but early the next morning he was back again at the Temple. A crowd soon gathered, and he sat down and taught them. 3 As he was speaking, the teachers of religious law and the Pharisees brought a woman who had been caught in the act of adultery. They put her in front of the crowd.

4 “Teacher,” they said to Jesus, “this woman was caught in the act of adultery. 5 The law of Moses says to stone her. What do you say?”

9 When the accusers heard this, they slipped away one by one, beginning with the oldest, until only Jesus was left in the middle of the crowd with the woman. 10 Then Jesus stood up again and said to the woman, “Where are your accusers? Didn’t even one of them condemn you?”

And Jesus said, “Neither do I. Go and sin no more.”

5 O Lord, you are so good, so ready to forgive,  so full of unfailing love for all who ask for your help.